REDCLIFFE MUSICAL THEATRE (RMT) TURNS 10 YEARS
Ten years ago a group of like-minded thespians got together with the aim of providing Redcliffe, and indeed the greater Moreton Bay Region, with access to high-quality, affordable family-friendly theatre - and so RMT was created.

Since then we have gone on to produce THE SOUND OF MUSIC – our inaugural production – MARY POPPINS, PHANTOM OF THE OPERA, The QLD Community Premier of WICKED, the WORLD Community Premiere of SATURDAY NIGHT FEVER, THE WIZARD OF OZ – in fact a whopping 23 major musicals over the 10 years.

Each of these musicals offers the opportunity to our community to join us onstage at the Redcliffe Entertainment Centre either as a performer, musician, backstage, front of house or in a production role. Usually these major musicals will incorporate a team upwards of 100 non-professionals and so we are keeping true to the values and goals that we aspired to when setting up the company to provide opportunities to our community – and in particular to our youth - to experience theatre first-hand in a professional theatre.

RMT have given literally thousands of young people the opportunity to experience being involved in a major theatre production and have inspired them to go on to bigger things in theatre.

Please HELP TO KEEP COMMUNITY THEATRE ALIVE IN OUR REGION by supporting our productions
Production Team:
Director – Madeleine Johns
​
As seating numbers are limited due to Covid 19, there are two Venues for this great concert to extend the season: 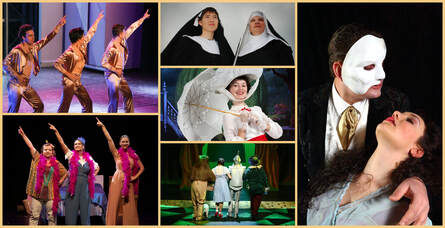 ​RMT was formed in September 2009 with the first production in August 2010 of the Sound of Music at the Redcliffe Cultural Centre as it was called then. There were 2 things that really drove the formation of the society – the fact that the RCC was not being used by ANY community group for theatre so there was NO community theatre at the RCC at that time and also that I could see no opportunities for youth in musical theatre. Having just come from Sydney where musical theatre was burgeoning and there was even a dedicated youth musical theatre company, it seemed to be an obvious gap in our local community. We chose The Sound of Music as our first production given the large focus on young people in the cast.

HIGHLIGHTS of our past 10 years -
WHAT WILL OUR CELEBRATION EVENT LOOK LIKE?
We are looking back at our past 10 years of performances. We have invited some of our previous leads to come and reprise their roles – especially the leads from PHANTOM OF THE OPERA – as well as the incredibly diverse group of previous performers that we have of all ages. TITLED Return of THE MUSIC OF THE NIGHT – this will definitely be a nostalgic musical celebration but also, in this very difficult year of 2020 for the Performing Arts, we hope to shine a light of positivity and hope on what we have achieved and rekindle a love of the performing arts in our Community. The audience can expect to see a show full of love, laughter and memories and hear some amazing voices and share in our journey so far.

WHAT HAS COVID MEANT TO RMT AND WHAT IMPACT HAS IT HAD?
COVID completely stopped our production of MAMMA MIA mid-season. We had literally only just got through one weekend of our 2 week season when the REC was shut down and so we have “paused” MAMMA MIA and we are now just in the process of re-starting our rehearsals and preparing to complete the season in January 2021. We will be performing 6 shows at the REC January 21-24. Because the REC is running  at 50% capacity, the 6 shows are still less than the capacity of what would have been the 4 shows remaining in our season. We have been hit hard both as a community of performers in terms of being able to come together and rehearse a show with a cast of 60 as well as the return on our investment being reduced due to the lower audience capacity. This is a time for our wider community to embrace and support the performing arts so that we don’t see companies closing down due to financial losses.

WHAT IS OUR VISION FOR THE NEXT 10 years?
Over the next 10 years we simply want to continue doing what we have done – bring high-quality, affordable productions to the Moreton Bay Region. There are still so many amazing shows for us to do and bring to our region. In 2021 we have planned to bring the return of MAMMA MIA, the Qld Premier of JERSEY BOYS and hopefully also PRISCILLA to our region!!  We remain committed to training and providing opportunities for our youth and to that end we are bringing MOANA Jnr to the REC in February 2021 as well as looking to tour to NZ in 2021. Our remaining goal is to be based at the REC so that they have a resident performing arts company – this could provide so many more learning and training opportunities for young creatives in our region.
Copyright © 2015 Redcliffe Musical Theatre. All rights reserved.
Site managed by mynameistrent.com
Contact | Code of Conduct | Privacy Policy