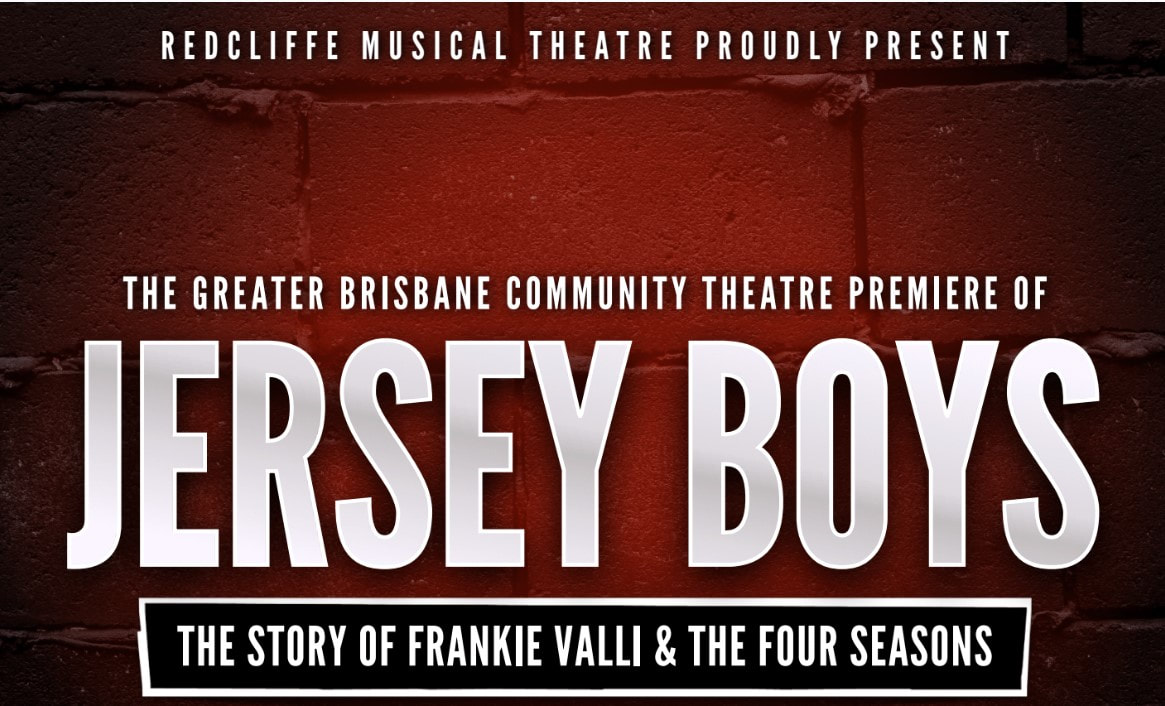 PRODUCTION COMPANY
Redcliffe Musical Theatre are proud to present the Greater Brisbane Community Theatre Premiere of the Tony, Grammy & Olivier Award winning musical Jersey Boys. The smash-hit show which has played on and off Broadway for over a decade has also enjoyed successful runs on the West End, in Las Vegas and been seen by millions of people around the world in countries like Japan, Dubai, Singapore, The Netherlands, South Africa and right here in Australia. Now, the signature sound of Frankie Valli & The Four Seasons comes to the Moreton Bay Region for a strictly limited season. Playing between March 12th and 21st, 2021 at the Redcliffe Entertainment Centre. This reimagined production, directed by Thomas Armstrong-Robley is seeking a diverse cast of talented singers, dancers & actors of performers to bring the platinum selling songs, beloved characters and unbelievable story to life.

ABOUT THE SHOW
Jersey Boys is a musical biography of The Four Seasons - the rise, the tough times, the personal clashes and the ultimate triumph of a group of friends whose music became symbolic and the soundtrack for a generation. Set in the vibrant 1960s, four scrappy young men from New Jersey - Frankie Valli, Bob Gaudio, Nick Massi and Tommy DeVito find a magic sound that propels them from singing under streetlights to singing in spotlights and on stages all over the world. With era defining songs like “Sherry”,"Big Girls Don't Cry" and "Walk Like a Man”, the quartet finds itself at the top of the charts. However, personal and professional problems threaten to tear the group apart. The heart of the show is how an allegiance to a code of honour learned in the streets of their native Belleville gets four unlikely stars through a multitude of challenges: gambling debts, Mafia threats and family disasters. Jersey Boys gives audiences a glimpse at the real people behind a sound that has endured for almost 50 years.

AUDITIONS
FIRST ROUND
The opening round of auditions will be via video submissions. When recording your video, please include: your name, age and the role or roles you wish to be considered for. Please sing a Rock N Roll, Doo Wop or Pop song in the style of the show (please use backing track or accompaniment, no acapella). Upload videos to YouTube, Vimeo or Dropbox then complete the form at www.redcliffemusicaltheatre.com and submit your link along with a headshot and performance CV for reference by the 10th of December, 2021. Note: Those wishing to be considered for the role of Frankie Valli or Joe Pesci (cover Frankie) must include examples of their high tenor and falsetto range as part of their audition video.

SECOND ROUND
Initial callbacks will be held on the evening of Tuesday, December 15th at Theatre 102 (102 Anzac Avenue, Redcliffe, 4020) At this call, auditionees will be asked to partake in a group movement call and closed vocal auditions. You may be asked to prepare material from the musical ahead of time.

FINAL ROUND
Final Callbacks will be held on the evening of Friday, December 18th at Theatre 102 (102 Anzac Avenue, Redcliffe, 4020) Performers being considered for leading characters and roles covering leading characters will be asked to attend a final audition where they will workshop scenes and group / harmony numbers from the show with other recalled actors. Note: While the above dates are our preferred callback times, we understand that people have busy schedules. If you are unable to attend callbacks due to a prior commitment then please let us know as soon as possible so our team can schedule an alternate time to suit.